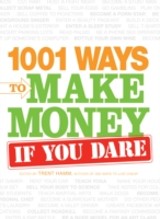 Everyone's in search of a quick buck, and now they know where to find itif they dare. Whether it's becoming a living, breathing billboard, or selling bootleg concert t-shirts in the arena's parking lot, there's plenty of ways to rake in the dough on daring ventures and ballsy entrepreneurial moves. This book documents hundreds of these potential money-making schemes, ploys, and backyard startups, including:Print [fashion]-on-demand. Have a witty turn of phrase? Stick a pop culture zinger on a t-shirt and sell it through cafepress.comGive your body to science. They're always looking for guinea pigs for an array of tests. All you have to do is sign upand been mindful of the side effectsBecome Trump 2.0: build an empire in the digital world (try Second Life) and then sell it for some major lootRated by the endeavor's risk level and potential return, this book offers up plenty of possible wallet-filling stunts. Employed or unemployed, young or old, daring or really daring, if you're looking to make some scratchthis book's for you.