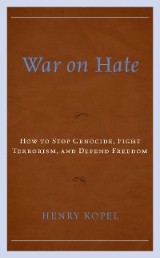 How to Stop Genocide, Fight Terrorism, and Defend Freedom

<p><span>The UN outlawed genocide in 1948, and the United States launched a war on terror in 2001; yet still today, neither genocide nor terrorism shows any sign of abating. This book explains why those efforts have fallen short and identifies policies that can prevent such carnage. The key is getting the causation analysis right. Conventional wisdom emphasizes ancient hatreds, poverty, and the impact of Western colonialism as drivers of mass violence. But far more important is the inciting power of mass, ideological hate propaganda: this is what activates the drive to commit mass atrocities, and creates the multitude of perpetrators needed to conduct a genocide or sustain a terror campaign. A secondary causal factor is illiberal, dualistic political culture: this is the breeding ground for the extremist, “us-vs-them” ideologies that always precipitate episodes of mass hate incitement. A two-tiered policy response naturally follows from this analysis: in the short term, several targeted interventions to curtail outbreaks of such incitement; and in the long term, support for indigenous agents of liberalization in venues most at risk for ideologically-driven violence. </span></p>
<p></p>

<p><span>Can genocide and terrorism ever be eliminated? This book says yes. It demonstrates that such atrocities are driven mainly by mass ideological hate incitement. Hence ending the violence requires shutting down the incitement – especially across the Middle East, where a tsunami of hate propaganda drives an epidemic of terrorism.</span></p>

<p><span>8/21/21, </span><span>Washington Examiner</span><span>: The author penned an op-ed on the topic of the book and the book is included. </span></p>
<p><span>Link: <a href="https://www.washingtonexaminer.com/opinion/op-eds/can-we-ever-stop-genocide-and-terrorism"><span>https://www.washingtonexaminer.com/opinion/op-eds/can-we-ever-stop-genocide-and-terrorism</span></a></span></p>